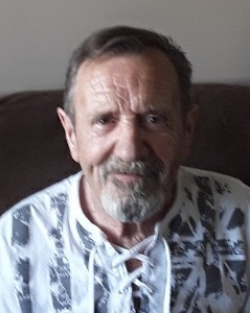 SAINT-CHARLES, NB – Fernand Robichaud, 71, of Saint-Charles passed away peacefully at the Stella Maris Hospital, Sainte-Anne-de-Kent on Thursday, May 12th, 2022, 18 days shy of his 72nd birthday. Born in Saint-Charles, he was the son of the late Benoit and Auréa (LeBlanc) Robichaud.

Fernand was a hard-working man that had many jobs. You could call him a “Jack of all trades”. He worked as a steel siding installer, carpenter, electrician helper and before retiring, an oyster farmer.

Before his illness, in his spare time, he would love to meet up with the boys to chitchat about everything and nothing. We know you will be in good company up in heaven as conversations are unlimited to your heart’s desire.

Fernand will also be sadly missed by his four sisters, Germaine Robichaud (Gerard) of Saint-Ignace, Edith Daigle (late Fernand Gallant) of Saint-Charles, Antoinette Petitpas (Normand) of Saint-Charles and Diane Babineau (Norman) of West Galloway; his brother, Jean-Yves Robichaud (Linda) of Saint John; as well as by his many nieces and nephews.

Besides his parents, he was predeceased by two brothers, Norbert and Louis and one infant sister, Fernande.

The family would like to extend their gratitude to the entire staff at the Stella Maris Hospital for the wonderful care given to Fernand and also, a special thank you to Fernand’s “special chauffeur”, Baptiste Johnson for his services throughout the years.

Visitation will be held at Thompson Funeral Home, Richibucto on Tuesday from 9:00am until time of the funeral. A funeral service will be celebrated on Tuesday, May 17th, 2022 at 11:00am, Thompson’s Funeral Home Chapel, Richibucto.