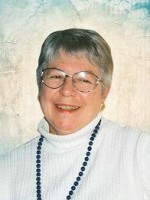 Cunningham, Jean Agnes (nee Elliott) à August 4, 1927 à Deloro, ON à August 29, 2014 à Calgary, AB. Jean passed away peacefully at the Rockyview Hospital with her daughters by her side. She is survived by her daughters Maggie (Sandy) of Calgary and Janet of Vancouver, her grandchildren Haley, Owen, Olivia, Amanda, and Brooke, great-grand daughter Avery, sister Mary, sister-in-law, Mary and many nieces and nephews. She is predeceased by her loving husband Alex, sons Sandy and Rob, father Robert, mother Gladys, and brother Robert. Jean was born in Deloro, Ontario where her father was the General Manager of the Deloro Smelting and Refining Company and village Reeve. After her father’s death in 1944, the family moved to Belleville, ON where Jean was a proud graduate of Belleville Collegiate Institute. After graduation, Jean attended nursing school at Belleville General Hospital. Jean went on a blind date for her BGH graduation with Alexander Cunningham and they were married a few months later on April 6th, 1950. They were happily married for 45 years until Alex’s death in 1995. Jean joined the Children’s Aid Society (CAS) in 1966, which led to her career in adoption services. Following her retirement from CAS after 26 years, Jean founded Four Counties Adoption Agency, which she continued to own and operate until age 75. Jean helped complete many loving families through her work in adoptions. Her lifelong love of babies and children led her west to Calgary in November 2002 to be closer to her grandchildren in Calgary, Vancouver and Quesnel.

There will be a celebration of Jean’s life on Friday, September 26th, at 1pm at Steele Funeral Home, Moira Street Chapel, 30 Moira St. West (613-968-2273). Following the service there will be a reception for family and friends at the Steele Family Centre. Private Inurnment at Belleville Cemetery.

The family wants to thank Dr. Tammy Calder and the staff of Unit 73 at the Rockyview Hospital for their compassionate care for Jean during her final weeks. Thanks also to the caring staff at Cedar’s Villa, Willow Unit for their wonderful care over the last 8 years.

Charitable donations can be made to the Heart & Stroke Foundation or Belleville General Hospital Foundation.