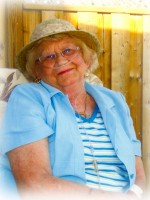 Fus, Shirley Gwendoline à peacefully with her family at her side, at Lakeridge Health à Bowmanville on Friday, June 14th 2013 in her 81st year. Daughter of the late Marion and Thomas Watt. Beloved wife of the late Stanley Fus. Loving mother of Rick (Gail) and Mike (Sandi) both of Belleville, Terry (Diane) of Peterborough, Rhonda (Doug) of Oshawa, Tom (Suzy) of Ajax and Dennis of Belleville. Predeceased by her son Frank Fus. Much loved Nana of Andrea, Katy, Michelle, Tara, Trevor, Kyle, Konnor, Steven, Emily, Justin, Garen and several great grandchildren. Predeceased by her granddaughter Shannon. Dear sister of Bob and Joan. Predeceased by her brother Ron Day. She is fondly remembered by many nieces, nephews and extended family.

The family will receive friends at the Steele Funeral Home, Moira Street Chapel, 30 Moira Street West (613-968-2273) on Thursday evening from 5:00 to 8:00 p.m. The Funeral Service will be held in the Chapel on Friday, June 21st, 2013 at 1:00 p.m. with visitation from noon until the time of service. Interment Belleville Cemetery.

If desired, Memorial Donations to the Heart and Stroke Foundation would be appreciated by the family.

Ever Remembered Ever Loved