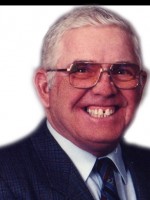 FUERTH, Francis Christopher (Frank)
was surrounded by his children as he completed his life’s journey on Sunday, September 29, 2013 at Hospice Residential House. He is now reunited with the love of his life, his wife Madeline (nee Vermeulen) (Feb, 1997). Loving father of Bernadette Fuerth, Brian and wife Karen, Sue Sherk and the late Tim (2013) and Steve and wife Jennifer. Proud papa of Spencer, Tate, Sabra, Graham, Devin, Cole, Kurtis, Tyler, Avery, Maddie, Carter, Trenten, Luke, Corey and Brady. Dearest brother of the late John (Marge), late Robert (Marion), Gerald (Lorraine), late Patricia Gillier (late Stan), Jean Wickenheiser (Ralph) and Donald (Denise) and brother-in-law of late Mick Vermeulen, Betty Isberg (late Fred), Blanche Loebach (John), Moe Vermeulen (Teresa), Rose Camphorst (Cory) and Al Vermeulen (Claudette). Francis will also be fondly remembered and missed by his large extended family. Francis was born on the family farm in Woodslee on December 31, 1935 to Charles and Marie Fuerth. He stayed and worked on the farm helping his parents and the farm eventually became his own, where he and Madeline raised their four children. He had a love of the land but his passion was his family especially his grandchildren. He was a kind and gentle man with an infectious smile who will be greatly missed. The family would like to give special thanks to all the (angels) who offered their time and support and to the staff at Hospice for providing a peaceful ending to his journey. Visiting at the Reid Funeral Home & Reception Centre, 87 Maidstone Ave. E., Essex (519-776-4233) on Monday 7-9 pm, Tuesday 2-5 and 7-9 pm and on Wednesday, October 2, 2013 at St. John the Evangelist Church, 1690 County Road 46, Woodslee from 10 am until Mass of Christian Burial at 11 am. Fr. Mousseau and Fr. Boutette officiating. Parish Prayers and K of C prayers Tuesday 4:30 pm. Interment St. John’s Cemetery. Memorial donations made to Hospice of Windsor Essex County would be appreciated. Family and friends are invited to share their words of comfort and remembrance at www.reidfuneralhome.ca

For more information about this obituary visit http://www.reidfuneralhome.ca.