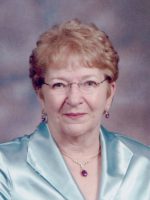 Mrs. Christiane Hoffman nee Lalonde from Hawkesbury passed away, at home in the arms of her husband, on Wednesday, May 4, 2016 at the age of 81. She was the beloved wife of Émile Hoffman; the daughter of the late Armand Lalonde and of the late Dora Larocque; the loving mother of Diane (Pierre Lacombe), Patrice and Robert (Naghielli); the adored grandmother of Alexandre (Rachel Funk), Élisabeth (Dean Baker), Katherine (Christopher Graham), Jonathan and Jean Zentella; the dear sister of Claudette (Jean Doris Cyr). She was predeceased by three brothers: Jean-Maurice (Marie-Paule), Roger and Richard (Dick). She is survived by many brothers-in-law, sisters-in-law, cousins, nephews, nieces and friends.

Funeral details were entrusted to Berthiaume Family Funeral Home 416, McGill, Hawkesbury, Ontario (877) 632-8511. A funeral service will be held at Saint-Pierre-Apôtre Parish in Hawkesbury on Friday, May 13, 2016 at 11 a.m. The family will be present from 10 a.m. to receive your condolences.

For those who wish, donations to the Heart and Stroke Foundation of Ontario, 36, Second Street East, Cornwall, Ontario, K6H 1Y3 would be appreciated.