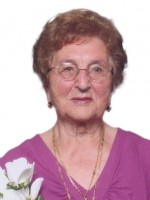 A resident of Leamington, Crocifissa Coppola passed away on Wednesday, November, 05 2014 at the Leamington District Memorial Hospital, with her family by her side, at the age of 93. She was born on June 19, 1921 in San Vito Lo Capo Trapani, Sicily, Italy and was the daughter of the late Giuseppe Badalucco and Alberta Badalucco (nee Donato). Loving wife of the late Francesco Coppola (1987). Dear mother of Giuseppa Monaco (Filippo), Andrew Coppola (Phyllis), Giuseppe Coppola (1946), and Bettina Alberta Coppola (Andrea). Dear Nonna of Alfonso & Ruby, Frank & Jacylin, David & Elise, Michael & Paula, Tony & Deanna, Frank & Deanna. Great-Nonna of Philip & Mitchell, Hope & Faith, Christopher & Benjamin, Katie, Nate & Maria, A.J., Nyomi, Bruno & Sonny. Crocifissa is survived by sister-in-laws; Vincenza Coppola, Paola Baracco, Crocifissa and husband Pietro Alongi in Leamington, brother; Giuseppe Badalucco in Argentina, sister; Suora Giuseppina Natalina in Italy, sister-in-law Rosa Coppola also in Italy. Predeceased by her brother Vincenzo Badalucco and sister Maria Cracolici in Italy. She is also survived by, and will be dearly missed, by many nieces and nephews. Many thanks to all the Doctors and Nurses at the Leamington District Memorial Hospital, and the staff at CCAC and Homecare for their tremendous care. Family and friends will be received at the Reid Funeral Home & Reception Centre, 14 Russell St. Leamington (519 326-2631) on Friday, from 2:00 pm to 5:00 pm & 7:00 pm to 9:00 pm. Mass of the Ressurection will be celebrated on Saturday, November 8, 2014 at St. Joseph’s Church, 310 Sherk St., Leamington at 10:00 am. Entombment to follow at Evergreen Memorial Park Cemetery, Leamington.
Memorial donations to honour Crocifissa’s life can be made to the Leamington District Memorial Hospital Foundation-Hospice Fund and would be appreciated by the family. Friends may send condolences or make a charitable contribution at www.reidfuneralhome.ca