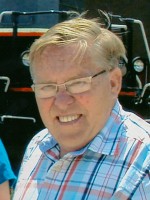 At his home in Listowel on Thursday, August 1, 2013, Mr. James Alvin Gamble, in his 73rd year. Beloved husband of Phyllis (Elliott) Gamble. Dear father of Lynne Bierling, and grandfather of Cameron Bierling. Brother of Thelma Hutton of Listowel, Jack and Audrey Gamble of Cambridge, and Lois Gamble of Fordwich. Brother-in-law of Pat and Lloyd Wheeler of Teeswater, Mildred Gray of Listowel, Helen Elliott of Richmond Hill.

Visitation will be held at the Eaton Funeral Home, Listowel on Sunday from 1:00 to 4:00 p.m. where the funeral service will be held on Monday, August 5th at 11:00 a.m.