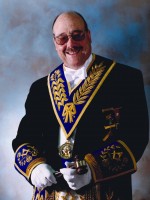 At Victoria Hospital, London, on Tuesday, September 17,2013, Anthony (Tony) Ellison of London, in his 79th year. Beloved partner of Isabel McBride. Loving father of Keith Ellison and his wife Hania of Burlington and Mark Ellison and his wife Anne-Marie of Gatineau, Quebec. Dear brother of Janet Ellison of Bedford, England. Also loved by his grandchildren David and Deanna Ellison. Friends will be received by the family from 2-4 and 7-9pm on Friday, September 20, 2013 at the A. Millard George Funeral Home, 60 Ridout Street South, London, where the funeral service will be conducted in the chapel on Saturday, September 21, 2013 at 9:30am. Interment in Christ Church Anglican Cemetery, Port Albert, Ontario. A Masonic Service under the auspices of Temple Lodge No.597 A.F. & A.M. will be conducted at the funeral home on Friday evening at 6:30pm. R.W. Bro. Ellison served as District Deputy Grand Master in 2001-2002 of the London East Masonic District, is a 32 Degree Scottish Rite Mason, member of the Royal Arch and a Shriner. As an expression of sympathy, donations may be made to the London Regional Cancer Program, c/o LHSC Foundation, 747 Baseline Road East, London, ON N6C 2R6. Online condolences, memories and photographs shared at www.amgfh.com