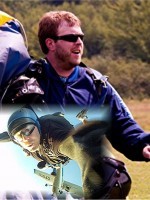 Passed away September 27, 2013, David Hodge of Ottawa, ON formerly of London, ON and Moncton, NB in his 35th year. Beloved son of Bruce and Anne-Marie (Stewart) Hodge of London. Loving brother of Valerie (Hodge) and Randy Thorsen and their daughter Emily of Innisfail, Alberta. Dear nephew of Angela (Hodge) Sampson of London, Brent and Zoe Hodge of Edmonton, Brian and Marcia Hodge of Winnipeg, and Paul Stewart of Montreal. Cherished cousin of Brandy and Christopher Sampson, Liam and Naomi Hodge, and Kurtis Hodge. Also missed by his friend Sandra Fitzpatrick of Moncton. David was born in London and attended Central High School where he was actively involved in football and rugby. David, better known as Dave to many, took great pride in his work with the Canadian Sport Parachuting Association as Executive Director and Information Technology Manager in Rockland, Ontario. His work combined two of his great loves, skydiving and computers. David’s smile, outgoing personality and willingness to help others will be missed by friends and co-workers. David enjoyed people, nature, the odd practical joke and travelling. Among his many adventures was as team manager of the Canadian skydiving team that went to the 2012 World Parachuting Championships in Dubai. A celebration of David’s life will be held in Moncton New Brunswick during the spring/summer of 2014. Friends will be received by the family on Friday, November 8, 2013 from 2-4 and 7-9 p.m. at the A. Millard George Funeral Home, 60 Ridout Street South, London. A memorial service will be held in the chapel at the funeral home on Saturday, November 9, 2013 at 11:00 am. As an expression of sympathy and In-Lieu of flowers, memorial donations may be made to the Canadian Sport Parachuting Association, 204 à 1468 Laurier Street, Rockland, ON K4K 1C7 or to the Canadian Mental Health Association, 648 Huron Street, London, ON N5Y 4J8. Online condolences, memories and photographs shared at www.amgfh.com