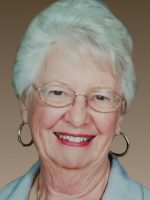 Peacefully in her 80th year at University Hospital, London, on Tuesday, June 7, 2016 with her family at her side, Elva was taken into the arms of her Lord. This followed a prolonged journey with Alzheimer’s Disease and more recently with Acute Leukemia. Elva was a dedicated member of Byron United Church as a follower of Jesus Christ. She was a nurse, member of the Sunningdale Golf Club, accomplished quilter, lover of music and a most devoted wife, mother, grandmother, sister, sister-in-law and friend to many. Survived by her husband Dr. Robert, her children and grandchildren Kelly and Kevin Buckley (Kelsie, Kira, Kayla) of Elmira, ON; Robert A. and Debra (Jasmine, Alex, Spencer) of London, ON; Stephen and Nicole (Lily, Simon, Charlotte, Zachary) of Toronto, ON. Elva was blessed with a large family and is survived by Charles Corbett (the late Elizabeth) of Exeter, ON; Marguerite McRoberts (the late Ross) of Lucan, ON; Don and Lenore Young of Waterloo, ON; Doris Hodgins (the late Don) of Lucan, ON; James and Florence Young of Strathroy, ON; Jack and Sandra Young of Gravenhurst, ON; and, by Elizabeth Coates (the late Ken) and Merv Hicks of Wellington-on-the-Lake, ON; Don and Lois Coates of Forest, ON; Paul and Therese Coates of London, ON; and sister-in-law Gay Coates of Ancaster, ON; and many nieces, nephews and cousins. Elva was predeceased by her parents James Alexander and Isobel (Wightman) Young and her brother Forrest Young. The family would like to thank the staff on the 10th floor Palliative Care Team at University Hospital, for their dedication, compassion and understanding. Friends will be received by the family from 2-4 and 7-9pm on Thursday, June 9, 2016 at the A. Millard George Funeral Home, 60 Ridout Street South, London. The service will be held on Friday, June 10, 2016 at 11am at Byron United Church, 420 Boler Road in London, ON N6K 2K5, with Reverend Gregory Brawn officiating. In lieu of flowers, the family encourages friends to consider a donation to the Byron United Church à Memorial and Honour Fund, Alzheimer’s Society of London & Middlesex, 435 Windermere Road, London ON N5X 2T1 or charity of choice. Online condolences, memories and photographs shared at www.amgfh.com