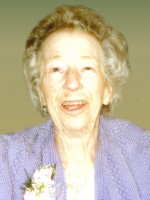 Peacefully at Trillium Villa Nursing Home, Sarnia on Saturday, June 15, 2013, Ellen Helen Nellie (McFarquhar) Gee, formerly of London in her 93rd year. Beloved wife of the late Eric Gee (2007). Predeceased by her daughter Vicki Foster, her parents Ellen and James, and her brothers Jim, George and Jack. Dear aunt of Blake and Audrey Hughes and longtime friends of Doreen and Henry Kohn and their families. She will be missed by many close friends in the London area, and the many friends from the Ford retirees. She enjoyed the many visits from all that came to see her. Friends will be received by the family from 2-4 and 7-9pm on Wednesday, June 19, 2013 at the A. Millard George Funeral Home, 60 Ridout Street South, London, where the funeral service will be conducted in the chapel on Thursday, June 20, 2013 at 1pm. Interment in Mount Pleasant Cemetery, London. As an expression of sympathy, donations may be made to the Heart & Stroke Foundation,150-633 Colborne Street, London, ON N6B 2V3 or London Humane Society, 624 Clarke Road, London ON N5V 3K5. Online condolences, memories and photographs shared at www.amgfh.com