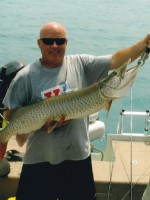 Suddenly at Victoria Hospital, London, on Wednesday, March 5, 2014, Patrick Harris in his 54th year. Beloved son of Patricia and the late Roy Harris, Mum will miss his daily 4pm visits to chat and read the paper. Loving brother of Judy and Philip. Kindred spirit to his late uncle Martin. Also missed by aunts, uncles and many cousins, mostly on the Prairie’s, especially Linda and Daryl. Harry was the life of the party and will be missed by many friends, especially Jeff, Dawna, Barb and Gene. He was born in Halifax, worked hard his entire life, starting as a Free Press paperboy and ending as a respected and popular Dental Office Technician. He loved fishing, chirping, Canadian hockey, his dogs, Holly and Musky, kids and bragging about his rose gardens. He was an incredible and competitive athlete, playing for the London Beefeaters, Jr B hockey and full body contact euchre. Cremation has taken place. Friends will be received by the family from 2-5 pm on Thursday, March 13, 2014 at the A. Millard George Funeral Home, 60 Ridout Street South, London. A celebration of life will be held on Friday, March 14, 2014 from 6-10 pm at the Mocha Shrine Centre, 468 Colborne Street, London, ON. Interment in Mount Pleasant Cemetery, London at a later date. In lieu of flowers, memorial donations may be made to the Charity of your choice. Online condolences, memories and photographs shared at www.amgfh.com