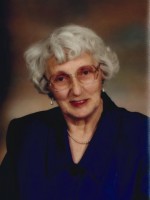 Peacefully after a long illness, with family by her side, Ruby Elzabeth (Fyfe) George in her 88th year, of Paisley Block Guelph Township. Beloved wife of the late Dr. John A. George, Professor Emeritus U.W.O. Loving mother of David (Maureen) George of Richmond, ON, Kathryn (Robert) Marion of Heidelberg, ON and Lois (Cameron) Denomme of London, ON. Cherished grandmother of Chloe, Carly, Brooks, Richard, Ruby, Elise, Marlene, Jillian and Ivan. Proud great-grandmother of Alayna and Kylie. Predeceased by her parents George and Violet (Millson) Fyfe and her only sister Helen and husband John D. Moore of Cambridge, ON. Graduate 1949 Ontario College of Pharmacy. She was proud to have practised her profession in Guelph, St. Catherines, London and Strathroy. She was a lifetime member of the U.C.W. and a member of Wesley-Knox United Church, London. Friends will be received by the family from 2-4 and 7-9pm on Sunday, June 23, 2013 from 2-4 pm and 7-9 pm at the A. Millard George Funeral Home, 60 Ridout Street South, London. The funeral service will be conducted at Wesley-Knox United Church, 91 Askin Street, London, on Monday, June 24, 2013 at 11am. Cremation with a private interment in Woodlawn Memorial Park Cemetery, Guelph. As an expression of sympathy, donations may be made to the Charity of your Choice. Online condolences, memories and photographs shared at www.amgfh.com