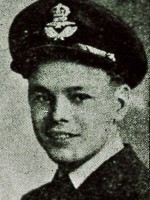 Died peacefully at home on Saturday, January 11th, 2014, in his 96th year. Beloved husband of the late Helen Fellner (2007). Cherished father of Joanne Preszcator (Jeff Wyatt), Ken, Patty Howard (Dave Reid) and Kevin (Lori). Adored by his grandchildren: Chris, Sarah and John Fellner, and Mercedes Preszcator. Alex was born to parents Augustus and Josephine near Weyburn, Saskatchewan and was the third youngest of 11 siblings. He was conscripted at age 21 and did basic training in Brandon, Manitoba. He eventually entered the Air Force and became a pilot in the CAF 427 Squadron and flew Halifax bombers during WWII. Alex made more than 17 sorties from his base in Yorkshire, England. His plane was shot down on June 13, 1943 near Holland. The plane crashed on the island of Texel with few survivors. Alex was presumed missing in action. He was taken prisoner and was a POW until being returned through neutral Sweden in January 1945. He was badly injured and only through the heroic efforts of fellow prisoners was he able to survive. Alex returned to Canada and, after many surgeries, was rehabilitated. He met Helen in Weyburn and they were married in Toronto in 1948. After studying at the University of Guelph and the University of Toronto, he and four of his brothers moved to London, Ontario and began building homes. Alex continued as a contractor and developer until he retired in the â80s. He was a founder of the London Home Builders’ Association and was President in 1964. An avid golfer and a long-time member at Sunningdale Golf & Country Club, he was also an accomplished musician playing the saxophone and clarinet in dance bands and marching bands during the â60s and â70s. Alex’s wish was to always stay in his own home. He was able to do so with the wonderful care from Senior Homecare by Angels, especially the many years of care provided by Alice until her retirement, and the recent care from Tessa, Lorna and Hermelinda in his final months. The family would like to thank Dr. Anne Souter for the very special care she provided to Alex over many years. Visitation will be held on Tuesday from 2:00 à 4:00 and 7:00 à 9:00 p.m. at the WESTVIEW FUNERAL CHAPEL, 709 Wonderland Road North, where the funeral service will be conducted on Wednesday, January 15th, 2014 at 3:00 p.m. Please consider donations to the Heart and Stroke Foundation of Ontario or to the Alzheimer Society in memory of Alex. Online condolences may be made at