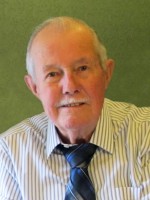 We are saddened to announce the sudden passing of Kenneth Hamilton who died peacefully on Thursday, January 16th, 2014 at home in his favourite chair, in his 85th year. Predeceased by his loving wife of 61 years, Marguerite (June 2013), whom he missed dearly. Survived by his loving children Steven (Samira), Paul (Gina), Ellen (Reid), Patrick (Maria), Lisa (Jay) and Andrew. Cherished Grandfather of Michael, Julie, Scott, Sheena, Wesley, Andrew, Kelsey, Skye, Spencer, Perry, Murphy, Philip, Jack and Tate. His memory will be treasured by sisters Joan (Joe) and Kathryn. Predeceased by brother William. Ken devoted many hours volunteering with many service groups. He was a member of the Knights of Columbus (past Grand Knight) and a current member of the Byron Legion. Ken established many friendships throughout his career in sales which could be attributed to his outgoing personality. Cremation has taken place. The memorial service will be conducted at WESTVIEW FUNERAL CHAPEL, 709 Wonderland Road North, on Monday, January 20th, 2014 at 4:00 p.m. with visitation one hour prior. In lieu of flowers, donations to the Canadian Diabetes Association will be gratefully acknowledged by the family. Online condolences may be made at www.westviewfuneralchapel.com