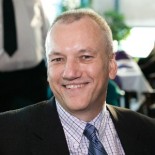 It is with tremendous sadness that we announce the passing of Doug Cope on Friday September 22, 2017 at the age of 63 with his loving family by his side. He is survived by his high school sweetheart, best friend, and wife of 41 years Trudy Cope. They were inseparable till the end. He was the father of three loving children Michelle (Archie), Tony (Ashley), and Kim (John) and the absolute best papa to Austin. Caring son of the late Fred Cope and survived by his mother Joan Cope and brother Don (Annette).

Doug joined the RCMP in 1979, and was posted to BC, where he made many incredible friendships. He later transferred to Ontario and retired from the force, and joined IIROC where he mentored and built relationships with many amazing colleagues.

Doug had a unique ability to make everyone around him feel better and special. He was the life of every party and the organizer of every family reunion, always emphasizing the importance of keeping family values strong.

Doug was very involved in community recreation, a referee, a mentor to many young ORA officials, a coach to his children’s sports teams as well as his grandson’s, and a long time Habs fan.

Doug will be deeply missed by his entire extended family and friends, who he loved and cherished so much.

Doug was without a doubt the kindest man; in lieu of donations, we ask that everyone perform a random act of kindness in his memory.