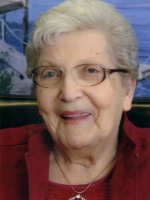 Anne was born in Bonnavista, Newfoundland, September 18, 1923, and grew up in Sydney, Nova Scotia. Anne was a veteran of the RCAF, having met Max while stationed at the #4 Gunnery and Bombing School base (Fingal). Anne played a key role in the family electrical contracting and mechanical businesses; Emery Electric Ltd. (Fingal) and Air Flo Heating and Cooling (London). In the 1960’s and 70’s, she was a recognized figure at fall fairs and race meets throughout southwestern Ontario, acting as Race Secretary as her late husband Max fulfilled the role of Presiding Race Judge. She was an enthusiastic owner and supporter of harness horses for over 25 years and continued to enjoy an outing to the races. Anne cherished times with family and friends and loved a great party or gathering, whether at home or in her former winter locales in Arizona or Florida. Quick with a joke, a sassy line or witticism she believed in living life to the fullest. She touched many lives and leaves behind fond memories of a life well lived.

Family and friends are invited to join a celebration of Anne’s life at the Bobier Villa, 1 Bobier Lane, Dutton, Ontario on Saturday , July 20th with a service at 2 pm followed by light refreshments. As per Anne’s wishes, ‘flowers are for the living’ and gratefully declined. Donations to the Heart and Stroke Foundation of Ontario in her memory or to support the Everleigh Pierce Trust Fund at www.gofundme.com/everleigh would be appreciated. Arrangements entrusted to the Sifton Funeral Home, 118 Wellington Street, St. Thomas (519-631-1160).