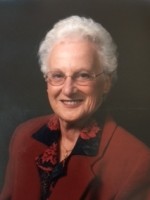 GOODHUE, Mrs. Jean (nee Cooke), of R.R.7, Aylmer, passed away at the Valleyview Home, St. Thomas on Tuesday, October 13, 2015, in her 90th year. Beloved wife of Charles A. Goodhue. Dearly loved mother of Kenneth Goodhue (Peggy) of R.R.8, St. Thomas, late Ralph J. Goodhue (2002) (Laurie of R.R.3, St. Thomas), and the late Joyce Goodhue (2013). Sister of the late Irene Watson (2011) (late Ray). Also lovingly remembered by 5 grandchildren, 6 great grandchildren, as well as a number of nieces and nephews. Born in St. Thomas, ON, August 8, 1926, she was the daughter of the late John and Mabel (nee Hutchings) Cooke. Jean was a former employee of Victor Gaskets Ltd., St. Thomas. She was a member of Yarmouth Centre United Church. The funeral service will be held at the Sifton Funeral Home, 118 Wellington St., St. Thomas (519-631-1160) on Friday, October 16th at 1:30 p.m., followed by interment in Union Cemetery. Relatives and friends will be received by the family one hour prior to the service. Memorial donations to the Canadian Cancer Society will be gratefully acknowledged. Gratitude is expressed to the nurses and staff on CP Place at the Valleyview Home for their kind, compassionate care.