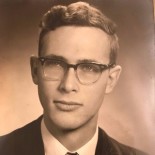 In loving memory of Michael.
At Markham Stouffville Hospital on Thursday September 21, 2017, Michael Abbot Dent passed away peacefully, surrounded by music and love. Beloved husband of fifty years to Lucille and loving father of Hayden and Nicole, father-in-law of Irena and Rachel. He was the dear brother of Ken and Chris, brother-in-law to Lorna Paar, and son-in-law of Elizabeth Ling. He is predeceased by his parents, Walter and Stella. He will be fondly remembered by his grandson, William, his nieces Jenny and Sara, and the rest of his family and friends. To know Michael was to love him. He was devoted to his family and he enjoyed life to the fullest.
Visitation, service, and reception arrangements have been made to commemorate Michael’s life starting at 9:30 a.m. on Tuesday September 26, at the O’Neill Funeral Home, 6324 Main Street, Stouffville, (905) 642-2855.
Flowers appreciated, or donation to Markham Stouffville Hospital, or a charity of your choice.

God saw you getting tired,
When a cure was not to be.
So He wrapped his arms around you,
and whispered, “Come to me.”