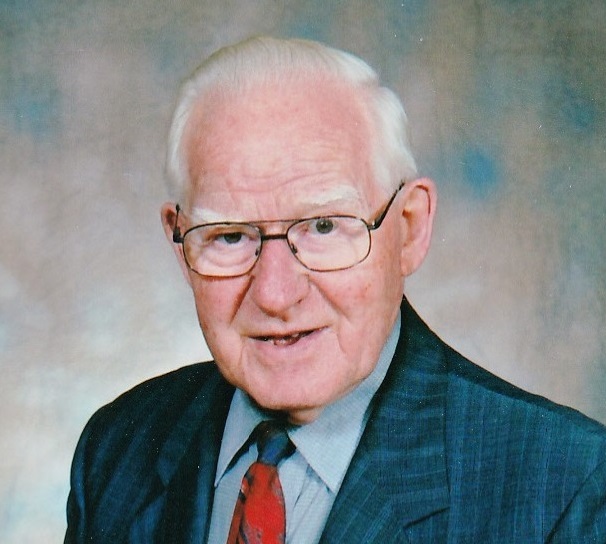 Kenneth Walter Fowler passed away peacefully, with family by his side, on August 30, 2018 at his Cedarcroft Residence in his 95 year. Born June 22, 1924 in Stratford, ON son of James and Florence (Hill) Fowler.
Veteran of WW II, Ken saw active service with the Royal Canadian Air Force, supporting the Royal Air Force, based near York, UK. As a member of 77 Squadron, he completed 38 missions over enemy territory as a tail-gunner in a Halifax bomber (1942- 1945). During the war Ken met his future bride, Patricia (Pat) Braun of Fredericton, NB, who also was a member of the R.C.A.F. serving as an aerial photographer. Ken and Pat were married Nov. 1945 and resided throughout their marriage in Stratford, ON.

A faithful member of Memorial Baptist Church, Ken served as a deacon, Sunday school teacher, usher and was a member of the choir for many years. In 2007 he was recognized by the church for his long service, dedication and willingness to assist others. Ken also served on the executive of Seniors Luncheon at Woodland Towers and did volunteer work at Spruce Lodge as a bible study teacher.

Ken was an accomplished upholsterer for 44 years at Kroehler’s Manufacturing, retiring in 1989. He enjoyed walking, skating, camping, fishing and gardening. He loved animals, always fed the birds and marveled at their antics. He was especially meticulous with regards to the upholstering of antique furniture.

Special thanks to Dr. Mark Wilkinson, the staff of Cedarcroft Place and the staff at the VON Day Program for their genuine care, understanding and compassion for Ken and his family. For this we sincerely thank them as well as our friends and family.

Cremation has taken place. A celebration of life for Kenneth W. Fowler will be held Sunday, December 2, 2018 from 2-4 p.m. in the Reception Centre of the W.G. Young Funeral Home, 430 Huron Street, Stratford. Words of remembrance at 3 p.m. Memorial donations may be made via W. G Young Funeral Home, Stratford to: VON (Perth-Huron) Day Program, Stratford Perth Humane Society or Sleeping Children Around the World.

(I feel fortunate that God granted me these years. I was blessed with a loving wife and together we had the pleasure of raising a family, of watching them grow and the pure enjoyment of sharing a part of their lives with them. Thank you all for your love and support. Until we meet again…)

(Just beyond the dark door of death
the Christian is greeted by the
Son of Righteousness!)