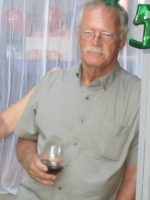 At home, on Tuesday, July 12th, 2016. Brad Fallowfield of Watford and formerly of Belmont and Woodstock at the age of 65. Predeceased by his parents Don and Marie and survived by his step mother Doris Fallowfield of Woodstock.

Brad will be dearly missed by his daughter Tracy (Paul) Shanahan and their children, Chloe and Camryn and his extended family; Stephanie (Darryl) Boyes and their son Thomas and Justin (Stacey) Howlett and their daughter Rylee.

Brad has left a rich legacy and many memories for the ones who loved him. He was a longtime volunteer fireman in Belmont, a hang glider, a grape grower outside of St. Thomas and a man who loved to help his friends and family build and fix anything.

As a final act of remembrance for Brad, do him a favour, take your grandchildren out for dinner or do something kind for the people you love.