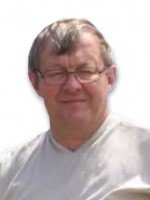 Age 60 years. Born in Cape Breton on September 15, 1955 to the late Donald and Cecelia (Leblanc) Gillis. Passed away peacefully November 4, 2015 in the loving arms of his wife Rose (nee Piovesan). Devoted father to Ryan, Kyle both of Windsor and Nicole (Ray MacEachern) Cape Breton, N.S. Doting and proud grandpa of Destiny and Riley Hill of Ingersoll, Ontario and McKynlea Rose Gillis of Windsor. Survived by brothers Leo (Anne), Martin (Marg), Russell (the late Bonnie), Wally (late Renee), Joe (Sherry), Alex (Debbie), Danny and Jerome (Lisa), sisters Mary Sauve (Eddie), Jane Gaudet (Pete), Theresa Gillard (Bram), Dolena Cassidy (John), Josie Delaney (John’s twin), Carmella Drouillard (Romeo), and Claudia Reed (late Chris). Son-in-law of Mrs. Joan Piovesan, Cape Breton, N.S. Brother-in-law of Debbie Duguid (Jim), Darlene Lemoine (Paul), Gerry Piovesan (Denise) and the late Jeannie (Pat MacKinnon) and the late John Piovesan. John was the proud uncle of many nieces and nephews. John was a true blue Cape Bretoner and his greatest joy was his yearly visits to the Island of his birth. He was well known for his off the wall humor and all who knew him have heard his many stories of growing up in a large family of 16 children. It would be a challenge to find another with the work ethics and endless drive that John possessed. He was a recent retiree of Chrysler where he worked 34 years in the trades department as a pipe fitter. He was a member of Local 444. He will be sadly missed but his vibrant and strong personality will live on in all of us. If you so desire, donation to the Kidney Foundation/Windsor & District Chapter would be appreciated by the family. Visiting Sunday 3-5pm and 7-9pm with parish prayers at 7:30PM at FAMILIES FIRST, 1065 Lauzon Rd., East Windsor, 519-969-5841. On Monday, family and friends are invited to meet after 10AM at Most Precious Blood Church (1947 Meldrum Rd.) for Mass at 11:00am. Cremation to follow. Share memories, photos or make a donation online at www.FamiliesFirst.ca